Hydroxychloroquine: The Indians worried over export of unproven ‘corona drug’ to United States 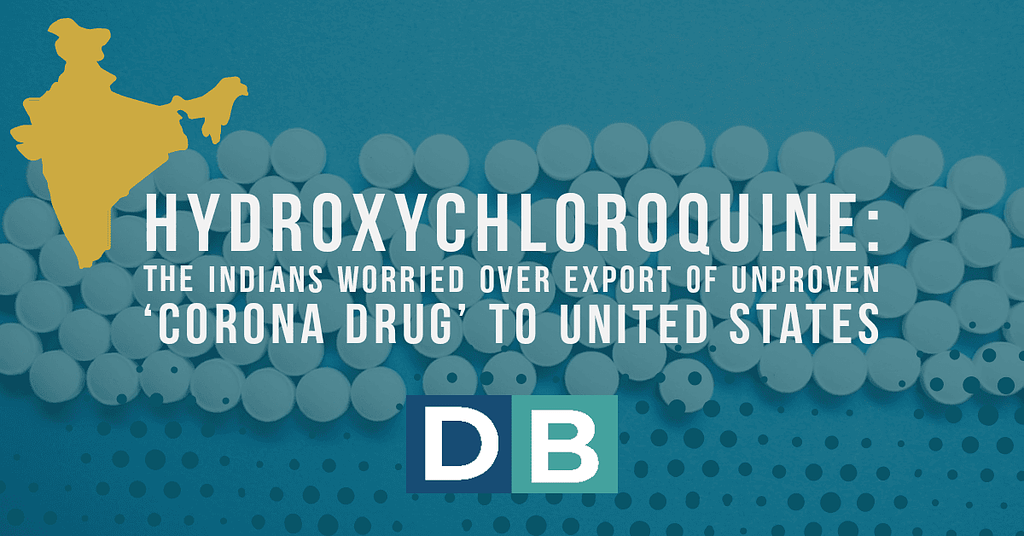 India's decision to export a drug that US President Donald Trump has touted as a possible cure for Covid-19 has worried many at home who take the medicine for other ailments.

There is no proof that hydroxychloroquine (commonly known as HCQ) is effective in treating Covid-19, but Mr Trump has called it a "game-changer" in the fight against coronavirus.

An anti-malaria drug, it's also routinely prescribed for autoimmune disorders like rheumatoid arthritis and lupus – John Hopkins Lupus Centre has described it as a sort of "lupus life insurance" – and is taken by thousands of Indians daily.

But now with all the hype around it, patients in India have looked on anxiously for the past fortnight as hydroxychloroquine has been disappearing from the shelves in chemist stores.

Kolkata (Calcutta) resident Barnali Mitra, who has been taking a daily dose of 200mg for 17 years for lupus, describes the medicine as a "lifesaving drug".

"It keeps my limbs functional," she told me over the phone from Kolkata.

Until recently, Ms Mitra could buy it off the counter, but last week, the authorities said hydroxychloroquine could not be sold without a doctor's prescription and even then one could only purchase one strip of 10 tablets.

After checking in several neighbourhood stores and ordering online, Ms Mitra has been able to procure 20 tablets, but what will happen after her stock runs out is making her anxious.

"I have been so stressed out that I have got rashes all over my face. My doctor has been advising me to be calm," she says. "But the thought of going from store to store, looking for the medicine makes my heart pound."

· Coronavirus and chloroquine: Does it work?

It recently banned exports saying the stocks were needed for Indians, but the government lifted the ban on Tuesday and said it would supply the drug to "nations badly affected by the coronavirus" and neighbouring countries to help out during the pandemic.

This has made people like Ms Mitra anxious about whether this would add to the existing shortages of the drug.

The Indian Pharmaceutical Association (IPA), however, insists that Indians have no reason to worry about shortages.

"The drug has vanished from the shelves because once some reports came that it was effective against Covid-19, people started buying it and hoarding it," IPA president Prof TV Narayana told the BBC.

The shortage, he says, is temporary, essentially because the government is trying to dissuade people from panic buying and hoarding a medicine that – if taken without medical supervision – can cause serious side effects.

"The two main producers of HCQ in India – IPCA labs and Zydus Cadila – can produce 1.5 million tablets each every day. The raw material for hydroxychloroquine is locally sourced and we have sufficient stocks. IPCA labs also has 50 million tablets in its stock. Most Indian states too are holding on to one to two million tablets so where is the question of shortage?" he asks.

Prof Narayana says the US has asked for 30 million tablets – a request that can be easily honoured.

He says for Indians who have a doctor's prescription for hydroxychloroquine, it will not be a problem to get hold of their daily dose although there might be some delays in the short term.

And that is what is worrying Kalpana Shah, a Bangalore-based senior journalist, who says she's "dependent" on hydroxychloroquine to remain pain-free.

"If I miss my daily dose I get aches and pains in my joints and there's tingling in my fingers which makes it difficult to hold things," she says.

Ms Shah has been taking hydroxychloroquine for the past four years for rheumatoid arthritis and like Ms Mitra, she too is worried because the drug is no longer available in pharmacies in her city.

"I have supplies for 20 days. Then what? My neighbourhood chemist says he doesn't know when the next lot will come," she says, adding that she would now "start taking the medicines on alternate days to make it last longer".

Ms Shah points out that there are no conclusive studies that say that hydroxychloroquine is effective in treating Covid-19.

"If I knew it was effective in treating coronavirus, I would give it up for the greater good," she says. "Not taking the drug won't kill me, but it will impact the quality of my life."

Want to obtain detailed info about?

If you want to get detailed information to know who the companies have been importing or exporing hydroxychloroquine; analyze the monthly behavior of the products; Or if you want personalized assistance for your business; You can write to sales@imexdbusiness.com or datasourcing@imexdbusiness.com