Imports & Exports Trade restrictions on food due to the coronavirus pandemic 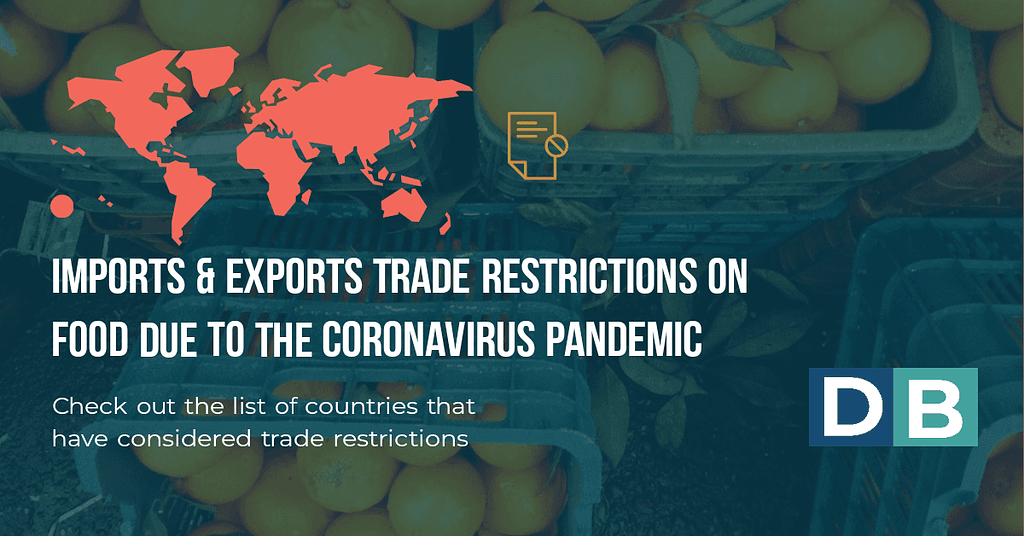 Here is a list of countries that have applied or are considering trade restrictions on food or agricultural products due to the spread of the novel coronavirus around the world.

The Eurasian commission, which unites the customs zone of Russia and Kazakhstan, has decided to restrict exports of sunseeds, buckwheat, rice and rye until June 30 due to the coronavirus, the RIA news agency quoted the commission as saying on Tuesday.

This customs union, which also includes Belarus, Armenia and Kyrgyzstan, will also not be supplying soybeans and some vegetables such as onions outside of the union until June 30, it added.

The measure will come into force on April 12, Interfax news agency reported on Thursday.

The Russian government on Thursday adopted an agriculture ministry proposal to limit grain exports to 7 million tonnes from April through June.

The agriculture ministry also said it would sell up to 1.5 million tonnes of grain out of its 1.8 million tonne stockpile to help meet domestic demand.

The measures are aimed at easing pressure on domestic food markets faced with a slide in the rouble currency. However, the authorities have so far refrained from using tough grain export curbs seen in past crises.

Ukraine has banned buckwheat exports until July 1 to defend the local market from excessive demand, the Ministry for Development of Economy, Trade and Agriculture said on Thursday.

Ukraine's biggest grain traders agreed on Monday to an economy ministry proposal to limit wheat exports to 20.2 million tonnes in the 2019/20 season to avoid a rise in domestic bread prices.

Bakers and millers in Ukraine, a major global grain exporter, last week asked the government to limit exports of grain and related products to maintain bread prices in the event of the coronavirus spreading.

The economy ministry had said it would control wheat export shipments, sell flour in the domestic market and agree with traders a maximum volume of wheat for export.

The ministry said Kazakhstan was also introducing quotas on exports of buckwheat, sugar, sunseeds, and certain vegetables such as potatoes and onions instead of earlier announced export bans.

The country had banned flour exports last month to ensure steady domestic supply before saying it would replace the ban with quotas for flour and wheat exports.

The world's third-largest rice exporter, which temporarily suspended rice export contracts until March 28, has not yet lifted its ban, traders said on Monday.

The Prime Minister said on Tuesday he had asked the Ministry of Industry and Trade to submit a rice export plan before April 5.

Egypt will halt the export of legumes for three months to preserve local supply, the trade ministry said on March 28.