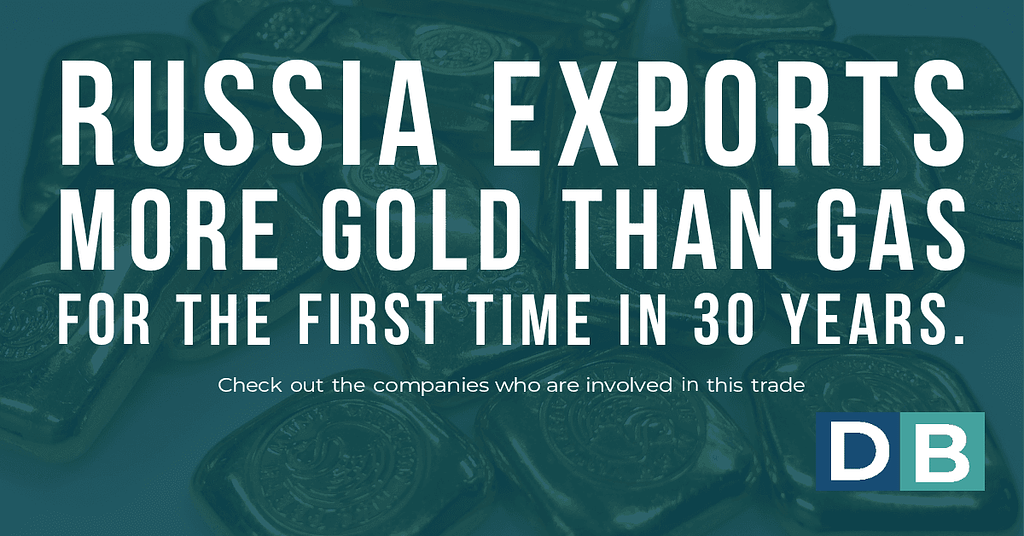 For the first time in nearly three decades, Russia exported more gold than gas in the second quarter of 2020.

Gold sales to foreign buyers came in at $3.6 billion in April and May alone, business daily RBC reported, citing figures from Russia’s customs service – ahead of an estimated $3.5 billion in gas sales for the full quarter.

This is the first time since at least 1994 that gold exports have topped gas sales, Maxim Khudalov of the Analytical Credit Rating Agency (ACRA) told RBC.

According to the Moscow Times, Gazprom, which has a monopoly on pipeline gas sales, exported $2.4 billion in April and May amid a global crash in demand for energy.

Separate figures from the Central Bank suggest sales will hit $3.5 billion for the entire quarter once June is included – that would be the state-controlled firm’s weakest performance since 2002.

Gold exports also jumped significantly, coming in 14 times higher in April and May 2020 than for the same two months last year.

Gold prices have moved in the opposite direction from energy commodities since the start of the pandemic – up 19 per cent this year – with the precious metal retaining its status as a safe haven asset in times of crisis.

Gas supplies for the same period brought Gazprom $2.4 billion. Gas exports for the entire second quarter of this year, from April to June, generated revenues of $3.5 billion. This is much less than the proceeds from the sale of gold. According to the Central Bank, this is the minimal amount for the quarter of the year since 2002.

This situation happens for the first time in the history of Russia, according to experts. Senior Director and Head of ACRA’s Sustainable Development Risk Assessment Group Maxim Khudalov said that since 1994, gas exports have always brought more revenue than gold exports. He explained that this happened, among other things, against the background of the Central Bank’s complete refusal to purchase precious metals.

Besides, in April, the rules for exporting gold changed – gold miners and refineries were equalized in export rights with banks.

Gazprom’s gas export revenues have fallen due to lower demand caused by the coronavirus pandemic, filling gas storages and warming. By the end of 2020, there will be a further drop in exports of blue fuel to Europe to 163 billion cubic meters.

This is comparable to the export volumes that Gazprom demonstrated before 2015, said Dmitry Marinchenko, the director of natural resources and commodities group at international rating agency Fitch Ratings.