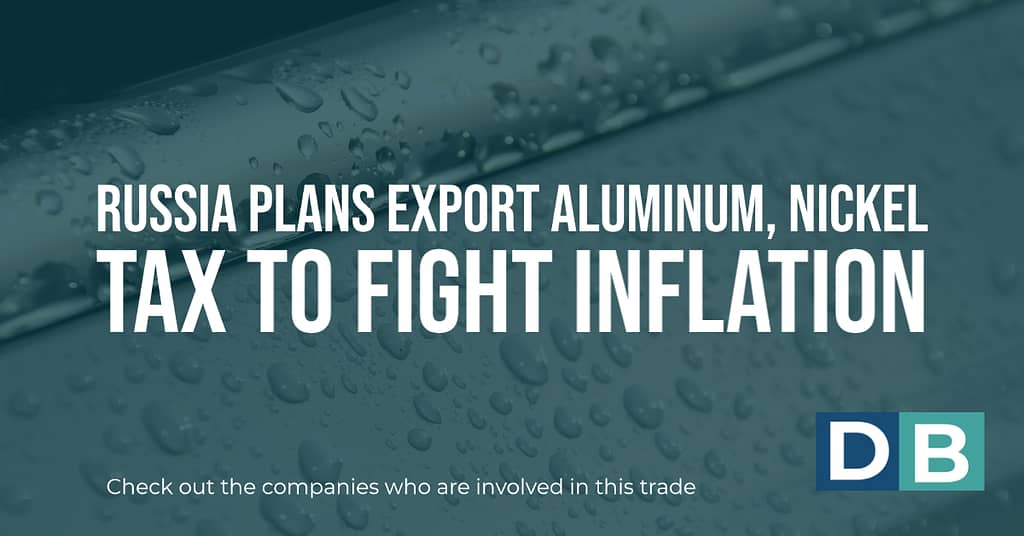 The government is proposing that a duty of at least 15% will be effective from Aug. 1 through year-end, with each metal also having a specific duty, Economy Minister Maxim Reshetnikov said. The tax will be charged depending on which rate is higher, a ministry spokeswoman said by email. The move is the latest in a series of steps by nations around the world to tackle surging prices for raw materials and other key goods.

Norilsk Nickel shares slid as much as 6.3% in Moscow, and Rusal declined as much as 7.9%. Novolipetsk Steel PJSC and Severstal PJSC led declines among steelmakers with shares falling as much as 6.5% and 7% respectively.

The reaction in metals markets was more muted, with nickel moving higher, copper trimming some losses and aluminum holding a decline. That may suggest investors expect Russian producers to carry on exporting and absorb the additional costs themselves.

“It’s revenue that would have gone to the company and their shareholders, and now it will be going to the Russian” state, said Colin Hamilton, managing director for commodities research at BMO Capital Markets. “Export taxes can be used to deliberately reduce exports, or they can be to raise revenue.”

Governments are taking more action to limit rising consumer prices. Russia has already introduced export taxes on wheat, while China has rolled out a swath of measures this year in a sweeping effort to stem inflation by cooling runaway commodities.

“We see that prices continue to rise in the second quarter,” Reshetnikov said at a televised government meeting. “Moreover, there are no signs that they will be able to adjust downward by the end of the year.”

The measures probably won’t affect Russian nickel and aluminum exports much because local usage is limited, said Kirill Chuyko, an analyst at BCS Global Markets. Russia consumes about 10% of the nickel it produces and about 30% of aluminum. Norilsk Nickel, Rusal and some Russian steel companies didn’t immediately comment.

More on the measures

Still, the move could have a knock-on impact on premiums paid by metals buyers in export markets if miners look to pass the levy onto their customers, traders and analysts said.

“They may try to pass the cost on to consumers, and where they might have some success in that is in the value-added products,” Hamilton said. It’s also possible that producers will look to boost exports before the duties kick in, he said.

The funds raised will be used to compensate for increased costs of the construction of infrastructure and other facilities that were affected by higher product prices, according to the Economy Ministry.