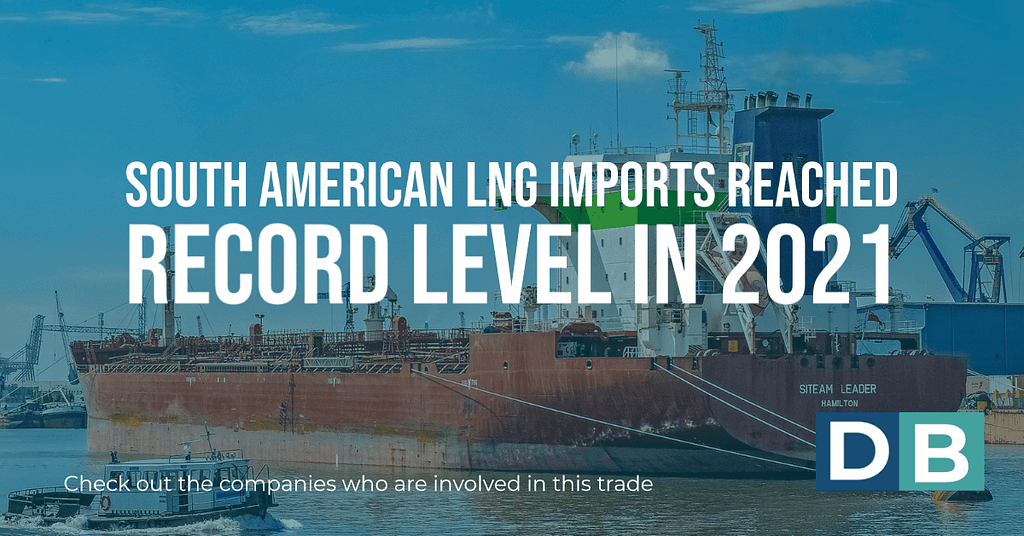 Brazil is responsible for almost half of the imports into South America for the record month, accounting for almost half of the total demand, or 37 Bcf for the month. The county has, however, been importing higher volumes than usual due to a sever drought that has brought hydroelectric reservoir levels down to critical levels.

The most recent data from Brazil’s electricity regulator, ONS, shows reservoir levels in the country’s Southeast and Midwest, the regions with the most hydroelectric generating capacity, declining steadily from already low levels since March.

As a consequence of the lower hydroelectric generation, Brazil has been forced to rely more heavily on its gas-fired power plants, increasing its reliance on LNG imports to meet demand above its own production and waning pipeline imports from Bolivia.

Brazil’s state-led Petrobras usually buys LNG cargoes on a spot basis, and so has been actively procuring cargoes to meet its domestic demand in recent months.

The timing of the demand has coincided with a bull run in spot LNG prices globally, and Brazil has been forced to compete with major buyers in Asia and Europe for Atlantic-sourced cargoes.

The vast majority of Brazilian imports are sourced from the US, and competition for flexible US-origin spot cargoes has recently pushed spot prices to all time highs.

The Platts Gulf Coast Marker, which tracks the value of a free-on-board US Gulf Coast, reached a record high of $11.90/MMBtu on July 5, reflecting both strong fundamental demand from Asia and growing price competition from Europe.

Brazil’s appetite for cargoes, however, seem unaffected by the high prices.

Buying interest for DES Brazil cargoes for prompt-delivery was most recently heard at around the a $0.30/MMBtu premium to the TTF.

Imports into Argentina have also been on the rise as domestic gas production and imports from Bolivia have proved insufficient to meet the projected demand for winter in the Southern Hemisphere.

Production complications caused by the global pandemic and insufficiently attractive downstream prices have stymied gas flows from the country’s massive Vaca Muerta shale play in the middle of the country.

The country has taken extraordinary measures to increase the amount of LNG that can be imported during the winter months, re-chartering on a short-term basis the floating storage and regasification unit that formerly operated at Bahia Blanca.

So far for 2021, the country has issued five buy tenders seeing almost 60 full-sized and partial tenders.

Deliveries from the earlier tenders started in earnest in May and almost doubled in June to reach just over 25 Bcf for month. This represents the single highest month of imports since August 2018.

The most recent of the tenders closed on July 6, and sought a total of four partial cargoes for delivery into the country’s Escobar terminal in August and September. Participation in the tender was heard to have been robust, with six trading housing submitting bids for the slots.

The pricing of this last tender is also likely to be impacted by the recent run up in LNG prices, with an additional premium charged for the less favorable logistics involved in delivering partial cargoes.

If you want to analize or know about different India markets just contact us:-To know who the companies have been; analyze the monthly behavior of the products; Or if you want personalized assistance for your business;You can write to sales@imexdbusiness.com or datasourcing@imexdbusiness.com