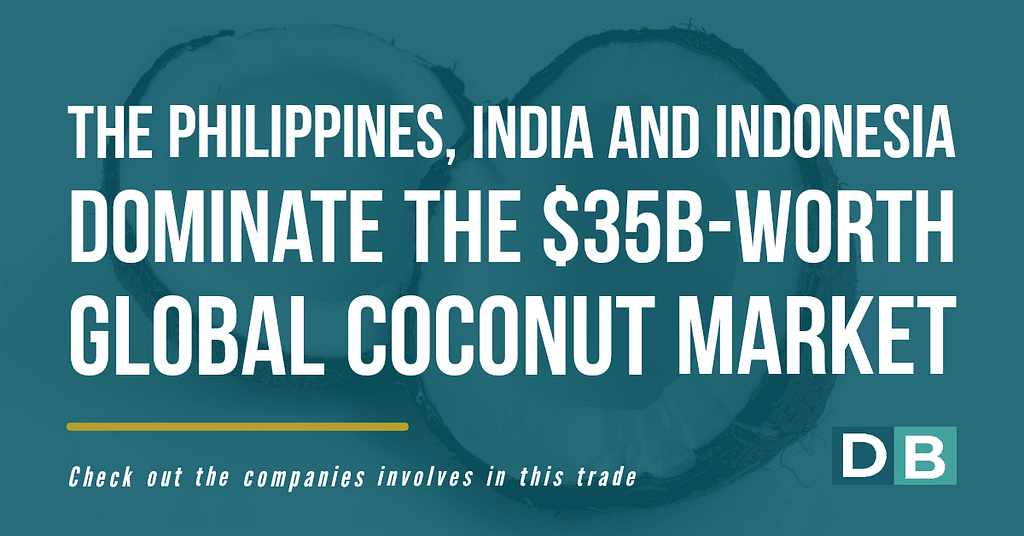 In 2019, after two years of growth, there was decline in the global coconut market, when its value decreased by -3.2% to $35.2B. Overall, consumption, however, saw a relatively flat trend pattern. The pace of growth appeared the most rapid in 2018 when the market value increased by 7.9% year-to-year. As a result, consumption reached a peak level of $36.4B, and then dropped modestly in the following year.

In value terms, the largest coconut markets worldwide were the Philippines ($9.8B), India ($6.8B) and Indonesia ($4.8B), together comprising 61% of the global market. These countries were followed by Sri Lanka, Brazil, Thailand, Viet Nam, Papua New Guinea and Mexico, which together accounted for a further 18%.

The countries with the highest levels of coconut per capita consumption in 2019 were Papua New Guinea (140 kg per person), the Philippines (136 kg per person) and Sri Lanka (125 kg per person).

In 2019, the number of coconuts produced worldwide reached 62M tonnes, approximately reflecting the previous year. Overall, production, however, continues to indicate a relatively flat trend pattern. The pace of growth was the most pronounced in 2018 when the production volume increased by 2.4% year-to-year. Global production peaked at 62M tonnes in 2013; however, from 2014 to 2019, production stood at a somewhat lower figure.

The countries with the highest volumes of coconut production in 2019 were Indonesia (18M tonnes), the Philippines (15M tonnes) and India (12M tonnes), together accounting for 72% of global production. Sri Lanka, Brazil, Viet Nam, Papua New Guinea and Mexico lagged somewhat behind, together comprising a further 14%.

From 2013 to 2019, the biggest increases were in Viet Nam, while coconut production for the other global leaders experienced more modest paces of growth.

For the fourth consecutive year, the global market recorded growth in overseas shipments of coconuts, which increased by 11% to 1.1M tonnes in 2019. Over the period under review, exports posted a prominent increase. Over the period under review, global exports attained the maximum in 2019 and are expected to retain growth in the immediate term. In value terms, coconut exports rose significantly to $527M (IndexBox estimates) in 2019.

Indonesia represented the major exporter of coconuts in the world, with the volume of exports resulting at 474K tonnes, which was approx. 44% of total exports in 2019. Thailand (178K tonnes) ranks second in terms of the total exports with a 16% share, followed by Viet Nam (16%) and India (9.9%). Guyana (27K tonnes), Hong Kong SAR (25K tonnes) and Sri Lanka (21K tonnes) held a little share of total exports.

In value terms, Thailand ($151M), Indonesia ($115M) and Viet Nam ($88M) appeared to be the countries with the highest levels of exports in 2019, together comprising 67% of global exports. India, Sri Lanka and Guyana lagged somewhat behind, together accounting for a further 18%.

There were significant differences in the average prices amongst the major exporting countries. In 2019, the country with the highest price was Sri Lanka ($852 per tonne), while Indonesia ($242 per tonne) was amongst the lowest.

From 2013 to 2019, the most notable rate of growth in terms of prices was attained by Sri Lanka, while the other global leaders experienced more modest paces of growth.