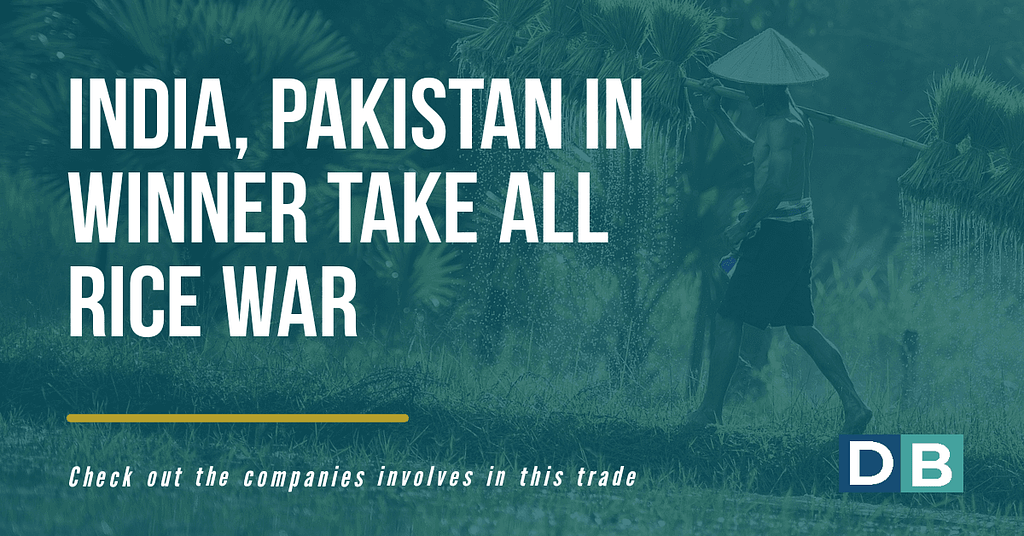 India and Pakistan are locked in a rice war that could produce clear winners and losers, namely in the European Union’s (EU) lucrative and growing basmati rice market.

Early rounds of the escalating branding battle suggest India could box Pakistan out of the EU and if its trademark “geographical indication” (GI) claim gains wider intellectual property protection traction perhaps in the US and elsewhere.

New Delhi is now bidding to win exclusive branding rights for basmati rice in the EU, a designation which if granted could hinder Pakistan’s competing exports while allowing India to fetch higher prices for its grains. The EU is currently considering India’s GI petition, to which Pakistan is belatedly and so far erratically responding.

Basmati is an aromatic variety of rice that is traditionally consumed across South Asia and is now making deeper market inroads overseas. Both India and Pakistan export a substantial portion of their annual yields to the EU, Middle East, South Asia and the US.

India commands around 65% of the global basmati trade while Pakistan has around 35%. Pakistan’s basmati rice exports to the EU have more than doubled in the last three years, rising from 120,000 tons in 2017 to 300,00 tons in 2019, according to the European Commission.

Future Pakistan gains in the EU are in jeopardy. In 2018, in a move that caught Pakistan off guard, India applied for an exclusive GI tag for the rice, claiming that its grain’s quality is linked directly to a specific Indian geography.

The argument is similar to France’s GI claim on champagne, which is recognized worldwide based on the region in France where the sparkling wine’s grapes are grown.

The GI tag is defined by the World Intellectual Property Organization (WIPO) as a distinct symbol that certifies the repute or features of a product due to its specific geographical location and quality production.

India’s move comes as its EU exports have been shrinking due to its inability to meet the union’s increasingly strict standards on pesticide use. That’s caused India to send more shipments to less lucrative Middle East markets, a trade trend New Delhi seeks to curb.

As India pushes to monopolize the EU’s basmati rice trade, critics say Pakistani officials have been slow to respond, perhaps not realizing the potential ramifications of India winning GI certification.

Experts and analysts say the consequences of India winning GI designation could be severe for Pakistani growers and traders. Over 40% of Pakistan’s labor force is involved in agriculture, with rice production covering around 20% of all cropped areas for food grain production.

Syed Wajid H Pirzada, a research scholar with interest in the World Trade Organization (WTO), a former WTO chief at Pakistan’s Ministry of Food and Agriculture and now CEO of Agrisol Pakistan, told Asia Times it would be devastating for Pakistan if India gets GI certification.

“If they (India) did, Pakistan will have to pay the cost in terms of trade loss. It may give a run over to India,” Pirzada said. “The move could also have a more adverse effect on the way other contestants would behave and even open the floodgate for other competitors in the run to get inferior quality of Basmati rice registered as trademarked in other countries.”

Abdul Qayum Paracha, chairman of the Rice Exporters Association of Pakistan (REAP), said that Pakistan basmati exports were up by 28% year on year in 2019-20, which he characterized as an “impressive performance.”

Paracha believes those shipments could be boosted with the rationalization of local costs to make Pakistan’s basmati more price competitive. India’s basmati, he notes, is currently $50 cheaper per ton, putting Pakistani growers and traders at a “disadvantageous position.”

However, he declined to speculate on how Pakistan would be hit if the EU granted GI designation to India’s rice, responding only that it was the “government’s job and they were doing well to handle it efficiently.”